Eldridge Concrete won a Golden Trowel and set a world record for Fmin Longitudinal Levelness for “The Lodge Cast Iron Distribution Center” in Tennessee. The overall average Fmin for this project is 165.8 This is a number representing the general quality of the aisle’s flatness and levelness as they affect the motion of the lift truck to be used on this floor. This is the third highest total ever recorded.

The Golden Trowel was presented at the World of Concrete in Las Vegas in January of 2018. The Golden Trowel Award trophy is a 24K gold-plated Marshalltown hand trowel, mounted on a polished black granite/walnut base, with a brass plaque. 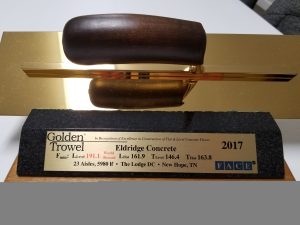